The Continental Resources High Resolution Virtual Core Library was initiated through a public-private partnership involving a generous gift from Harold Hamm, Continental Resources and a grant from the North Dakota Industrial Commission Oil and Gas Research Program. Significant assistance was also provided by the geologists with the North Dakota Geological Survey and staff at the Wilson Laird Core Library.

The University of North Dakota (UND) and the Continental Resources High Resolution Virtual Core Library program partnered with Corescan, a hyperspectral core imaging (HCI) service company headquartered in Perth, Australia.  The purpose of the project is to develop and expand upon the North Dakota Department of Mineral Resources digital core imagery collection. Results will be released in two stages; 1) the high resolution photography and composite hyperspectral imagery, followed by 2) mineral mapping and geochemical parameters.

The primary difference between the Corescan imaging system and more conventional photographic methods is the addition of high resolution spectral reflectance measurements that are integrated with RGB visual imagery and 3D laser profile imaging. This allows for the identification and mapping of mineralogy and mineral chemistry parameters for drill core, rock chips, hand samples, and other geological material. Hyperspectral core imaging provides a new dimension to core evaluation that is non-destructive, consistent and contiguous, as well as digitally accessible via Coreshed, a cloud-based visualization platform.

A Corescan HCI-3 mobile laboratory arrived at the Wilson Laird Core Library in Grand Forks, ND in November, 2018. Over the next 30 days, approximately 10,000 feet of core from various locations within the Williston Basin were scanned by trained Corescan operators.  Samples were selected by the North Dakota Geological Survey (NDGS) and core preparation was conducted by the NDGS, UND students and Corescan operators. Scanning generated approximately four terabytes of data that was interpreted by Corescan geologists over the course of the next several months. Spectral data interpretation was enhanced by student investigations at the UND. Projects investigated specific questions raised by the hyperspectral data interpretation and were further investigated using a broad range of techniques, the results of which were used to refine the Corescan spectral signature interpretations.

As of June 2020, the UND Corescan data (photography, 3D core topography and hyperspectral imagery) and associated products are available to the public. New research content provided by UND faculty, students and collaborators, will be posted on the News & Data Releases tab.

Oil and gas core from across the Williston Basin were carefully selected for the UND-Corescan collaboration to;

The UND-Corescan Project provides opportunities to the oil and gas research community, local industry, and other interested parties;

Hyperspectral core imaging (HCI) is a non-destructive method of assessing the mineral composition of samples using a combination of advanced sensors and software.

Hyperspectral core imaging measures spectral responses across the Visible Near InfraRed (VNIR) and Short Wave InfraRed (SWIR) bands at sub-millimeter resolution. The rock core surface is illuminated using a high intensity broad band light source. The interaction of this light with the molecular structure of the minerals in the rock results in a pattern of absorptions and reflections that are measured across the wavelength range of the spectrometer. The absorption pattern creates a spectral signature that is unique to the targeted material. Corescan geologists interpret the resulting spectra by comparing the data to a large calibrated library of spectral signatures using specialized matching algorithms in order to identify minerals and mineral groups. Data collected across the entire exposed core surface is used to generate detailed mineral distribution maps, as well as maps of selected mineral chemistry.

Corescan is an Australian company specializing in geologic sample imaging and analysis. The company developed a novel technology combining reflectance spectroscopy, visual imaging, and a suite of analysis tools designed to identify and log mineral content.  Corescan operates globally in the oil and gas sector, as well as with mining and mineral exploration companies, core libraries and research facilities. More information about the Corescan technologies and operations can be found on the Corescan corporate website.

In 2018 Corescan partnered with the Harold Hamm School of Geology and Geological Engineering at the University of North Dakota and the North Dakota Geological Survey to study 9,784 ft of oil and gas cores archived in the Wilson Laird Core Library in Grand Forks, North Dakota.  Corescan provided high resolution hyperspectral imaging (VNIR-SWIR), RGB photography and 3D laser profiling of the core using its HCI-3 instrument. Seventy six wells distributed across the Williston Basin with cores from five producing intervals or source systems were scanned and interpreted by Corescan geologists.  The results of this work and the use of the Coreshed web platform are proudly provided here free of charge by the University of North Dakota and Corescan.

Data is also available without the visualization tools offered in Coreshed on the News and Data Releases tab of this site.

Tyler Formation of mid-Pennsylvanian deposits contain alunite group of minerals that occur as pebble to granule-sized clasts in a massive mudstone to shale containing halloysite and kaolinite, was first identified by hyperspectral core scanning. XRD analysis of two powdered samples from these clasts has confirmed the presence of multiple mineral phases of alunite group. Other six samples, not recognized by hyperspectral core scanning validate the presence of these minerals as the groundmass or matrix. SEM verifies presence of kaolinite and possible halloysite. Modern occurrences of alunite are rare and limited to arid environments with groundwater that contains high dissolved sulfate concentrations and very low pH. These minerals may form under the influence of an extremely acidic syndepositional environment or shallow post depositional diagenetic processes. Alunite minerals have been identified in Permian red beds across Wyoming, Utah and in the Permian Opeche Formation in North Dakota.

The existence of these minerals satisfies one diagnostic feature associated with extremely acidic lakes and groundwater. This study is able to conclude that alunite minerals identified by hyperspectral imaging and confirmed by XRD are present in the red beds found in the upper portion of the Tyler Formation. Additional work will be needed to identify other mineral associations and the source of low pH that would further define a conceptual framework consistent with the depositional settings and early diagenetic chemistries, that may extend across the Pennsylvanian-Permian boundary in the Williston Basin.

This paper was prepared for presentation at the Unconventional Resources Technology Conference held in Denver, Colorado, USA, 22-24 July 2019.

Hyperspectral core imaging studies of the Bakken-Three Forks formations over the past four years has revealed non-destructive, high resolution, spatially relevant insight into mineralogy, both primary and diagenetically altered that can be applied to reservoir characterization. While ‘big’ data like co-acquired hyperspectral imagery, digital photography and laser profiles can be challenging to analyze, synthesize, scale, visualize and store, their value in providing mineralogical information, structural variables and visual context at scales that lie between (and ultimately link) nano and reservoir-scale measurements of the Bakken-Three Forks system, is unique.

The resulting spatial context of this hyperspectral imaging-based mineralogy and assemblages are particularly compelling, both in small scale micro-distribution as well as borehole scale mineralogical distributions related to both primary lithology and secondary alteration. These studies also present some of the first successful measurement and derivation of lithology from hyperspectral data. Relationships between hyperspectral-derived mineralogy and oil concentrations are presented as are separately derived structural variables. The relationship between hyperspectral-based mineralogy to micro-scale reservoir characteristics (including those derived from Qemscan) were studied, as were relationships to larger-scale

downhole geophysical data (resulting in compelling correlations between variables of resistivity and hyperspectral-mineralogy). Finally, basic Net-to-Gross calculations were completed using the hyperspectral imaging data, thereby extending the use of such data from geological characterizations through to resource estimations.

The high-fidelity mineralogical maps afforded by hyperspectral core imaging have not only provided new geological insight into the Bakken-Three Forks formations, but ultimately provide improved well completion designs in those formations, as well as a framework for applying the technology to other important unconventional reservoir formations in exploration and development. The semi-automated nature of the technology also ushers in the ability to consistently and accurately log mineralogy from multiple wells and fields globally, allowing for advanced comparative analysis. 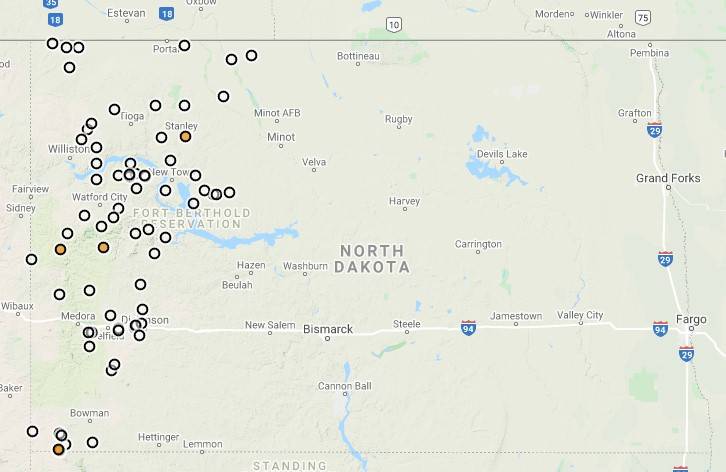 Map of North Dakota showing the locations of the wells that supplied cores for the hyperspectral imagery available here.

For log-in issues or to report a problem with Coreshed data displays, please contact coreshed@coreshed.com.

By clicking any link on this page you are giving your consent for us to set cookies, Privacy Information.